Three Siena Delights
Siena attractions that will light up your vacation

Siena is a difficult city to come to grips with. It’s known for a twice a year horse race called the Palio, a race that, for Americans, has elements in it that a reasonable person would ascribe to insanity. It’s what attracts us to the city, mostly.

And yet to ignore Siena outside the frenzy the Palio brings is to ignore a noble part of Tuscany and Tuscan tradition. Siena is a city to savor slowly. It is a “darker” city. Think scorched earth, “burnt Sienna”, Siena Brown, the deep rich brown of the panforte. 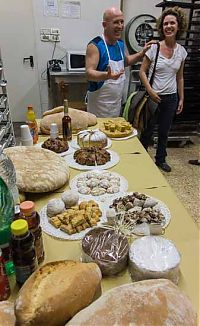 In fact, your first stop might be to sample the city’s iconic cake, the “strong bread” with a pedigree that goes back to the 12th century (although some say it’s older than that). There’s no better place to sample panforte than Il Magnifico bakery on Via Dei Pellegrini 27, the street of the pilgrims.

Of course, nothing is that easy. Il Magnifico produces two panforte. The regular one is done much like they did it in the 12th century, but there’s also the Panforte Margherita, developed in the late 1800s for Queen Margerita of Savoia, who came to see the Palio with King Umberto every year.

And then, let us talk about the bakery’s Ricciarelli. The little white almond cookies of il Magnifico are tantalizingly light, the foil to the heavy panforte. The secret of the Ricciarelli here is that only freshly ground almond flour is used. Many Ricciarelli are made with almond paste, which makes a heavier cookie. Avoid those.

And if you’re in Siena in November, don’t miss out on Pan Co’ Santi, a spiced “saint’s” bread (with a touch of pepper!) meant to be eaten with a bit of wine.

Il Magnifico has a site in Italian where one can buy their sweet offerings and see pictures of what they produce.

And by the way, the street name referring to pilgrims is interesting. Panforte was a staple on the long pilgrimages, it lasted a long, long time. 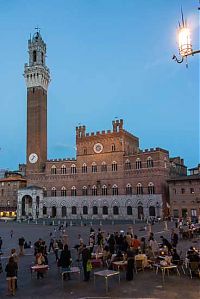 From Il Magnifico it’s a short walk downhill to the Piazza del Campo, a marketplace in the 13th century and now a hangout for Italian youth sprinkled with tourists who’ve had the sense not to make Siena a day trip. The curved side of “il Campo” as the locals call it is lined with restaurants, bars and souvenir shops.

You need to sit down. You need to participate in one of the great Italian customs glossed over in most guidebooks: aperitivo time.

Italians have traditionally looked down on drinking alcohol without eating. The purpose of wine is not to get you drunk but to easy you into the non working part of the day. The Osteria grew out of this need to put a space between work and play, the sacred and profane, and to offset the effects of alcohol with food. Liberamente Osteria is really a place that embraces the traditional definition. You can get wine, beer, or an Italian cocktail like a Negroni or the lighter Americano. A few things, olives, perhaps some potato chips will come to the table as usual, but if you’re hankering for some food, some great food that just hits the spot with a drink, the Osteria Liberamente will put something together artistically in a flash. The tuna was a hit, I mean a big hit—and they didn’t have to cook it.

So when the sun sets in Siena, and the moon rises over the Palazzo Pubblico, forget the tourist traps, get thee to Osteria Liberamente. And don’t just sit outside. Go in. It’s a tight squeeze, but the televisions embedded into the mosaic floor, the little box of a space the food preparer labors in, and the architecture in one of the world’s best-known public squares will make for an interesting visit.

And the place is great if you’ve had a big lunch and you’re just looking to nibble at dinner time. The food varies every night, depending upon what’s in the market and the caprice of the cooks. 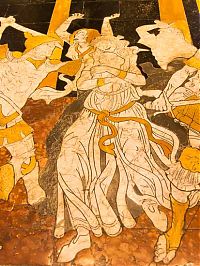 You may not know it, but the inlaid marble floors of the Siena Duomo are covered most of the year to protect them from the effects of thousands of people a day stomping on them. Remember, artist and historian Giorgio Vasari called the floor “the most beautiful, big and magnificent that has ever been done.”

Before your trip to Siena, see when the opening dates are for the floor. In 2012 the real floor was visible from August 18 through October 24. There is a charge for seeing the uncovered floor.

2016 is a Jubilee year, and the floors will be open for a longer period in the summer, see: Siena Duomo Floor Panels

Commenting is closed for this article.

Disclosure: Content on these pages may contain affiliate links, which allow us to bring this free content to you.

We partner with bookshop.org, an online bookstore that promotes local bookstores and indy writers, to bring you our recommended guides.